Gear Guy: Is It Okay to Wear Socks with Rock Climbing Shoes? 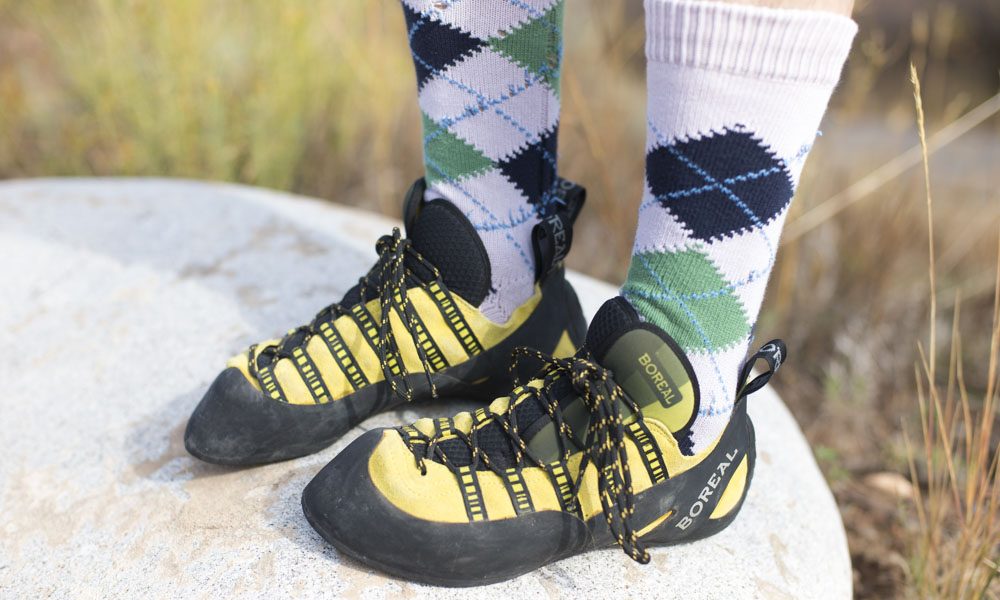 Is It Okay to Wear Socks with Rock Climbing Shoes?

I have noticed that hardly anyone wears socks in their rock shoes. Hardly is an understatement. Actually, I may be the only climber on Earth who wears socks. To me, socks make sense. Rock shoes, even expensive ones, are uncomfortable and socks add a bit of cushion and a hygienic layer. Am I wrong to wear socks?

The fashion of not wearing socks—or going “commando,” raw doggin’ it, etc.—in rock shoes is, like sagging pants, a recent phenomenon. When I started climbing in 1973, almost everyone wore socks with E.B.s or P.A.s, non-sticky-rubber shoes that were smart accessory footwear to the thumbscrew, but of limited value on rock. When you wore shoes such as these, said to have been cast on a men’s dress-shoe last complete with point, socks provided padding for your tortured dogs.

Yet sometime around 1983, when sticky Fires hit the market, most climbers refused to give up their socks. This might have been because we had been trained to wear them, or we wanted to look like John Bachar, who famously sported calf-high tube socks with his Fires, or because back then everyone climbed long routes and had to carry sneakers and socks anyway for the certain-to-be-really-long descents.

Assuming you are merely a practical person rather than one who falls into any of the above categories, wearing socks, as you noted, does protect your feet from a shoe’s harsh stitching, seam tape and other interior sharpies. If I were climbing El Cap, or any bit of long stone, or cracks, I’d size my rock shoes slightly larger and wear socks for comfort.

There is, of course, the question of sensitivity. Performance demands a skintight fit, and that demands that the skin of your foot press right against the interior of the shoe. It can be said that going sockless gives you a better “feel” for the holds, that socks dull the sensation, like wearing a raincoat in the shower.

Pshaw. Saying that you can feel the rock through a slab of rubber and a midsole is to confuse “sense” with “feel.” You do develop a sense for how your shoe contacts the rock, how the edge sits on holds, for example, but it is a stretch to believe that you can actually feel the texture and shape of the holds through the shoe sole. This is especially true for board-lasted shoes, which have the feel of wooden clogs (and which I prefer, really). There are exceptions, of course, such as the new Gummies (Team VXi) by Five Ten, a condom-like slipper that I doubt you could get on over a socked foot.

In most cases, though, there is no rational reason for not wearing socks. Instead, it all comes back to fashion, and as they say, “fashion changes, style endures.” If you like socks, fly them with pride. Next!