I was gambling: two kings face down in front of me, and a third in the middle of the table, along with two spades and half my chips. I shoved my remaining $150 into the middle. Of course my opponent called and turned over two more spades. Climbing photographers aren’t the highest-paid people in the world, so a $540 pot was plenty to fire my adrenal glands into hyperdrive. 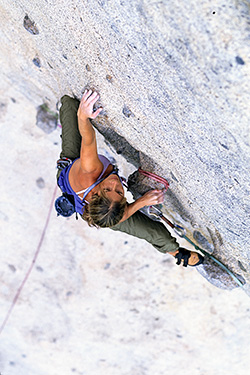 I was gambling: two kings face down in front of me, and a third in the middle of the table, along with two spades and half my chips. I shoved my remaining $150 into the middle. Of course my opponent called and turned over two more spades. Climbing photographers aren’t the highest-paid people in the world, so a $540 pot was plenty to fire my adrenal glands into hyperdrive.

Earlier, I was climbing at the ultimate “moderate” crag, Lover’s Leap in South Lake Tahoe, in the Sierra Nevada Mountains. I’d forgotten to bring a big enough cam on the super-classic 400-foot Traveler Buttress (5.9), and my tipped-out #3 took up the only constriction in the second-pitch squeeze chimney that would accept a fist. Eight feet above, I made a desperate lurch, and then whipped past my lone cam.

My fall on Traveler left me trembling the same way I would watching the dealer at Harvey’s Casino turn the last card.
My pair of kings held through the Turn (the fourth card), but the River (final card) was a spade, and I left awash in a loser’s rush.
Exiting the casino, I ruminated about a few things: my empty pockets, my adrenaline addiction and, mostly, “WTF is a ‘moderate’ climb?”

Researching a story about Tahoe moderates meant that I got to visit some super-fine crags: old stand-bys like Donner Summit and Phantom Spires, new zones like The Bowman Valley, and forgotten gems like Calaveras Dome and Woodford’s Canyon. Finding classic climbs in the 5.6 to 5.11 range was easy in the bullet-hard, well-featured granite.

First up was a trip to Lover’s Leap, a perfect crag etched with sinewy dikes. Because of the abundance of face holds, everybody seems to make his or her first lead at the Leap. As my friend Anne Kern and I hiked up the old Pony Express Trail that traverses the base of the quarter-mile-long cliff, we talked excitedly about which of the many steep and classic 5.8s we would do.

It was then that Anne made what I initially thought was an obtuse observation, claiming, “5.8 is the most extreme grade in climbing.”
I chuckled in some confusion. Everybody knows the most extreme grade is runout 5.14 or some such, so I asked why she would say that.
“For starters,” she pointed out, “hard climbs are steep and smooth. When you fall, there’s nothing to hit. Five-eight seems to be the grade that commonly has the most dangerous conditions: less than vertical with plenty of ledges, knobs, dikes and jugs to smash into.”
I acknowledged her point, but countered that 5.8 is easy and therefore falls are less common.

“It’s all relative,” she said. “Often people who are climbing 5.8 are at or near their limit—so there are plenty of hairball falls.”

As we wandered past The Line, a striking directissima first free climbed in 1968 by the elite climbers Tom Higgins and Frank Sarnquist, I recalled that, at 5.9, the route had been likely the hardest in Tahoe at the time. Ten short years later, at another Tahoe crag, Tony Yaniro made the first ascent of Grand Illusion, at 5.13c then the hardest route in the world. I wondered if that would someday reach “moderate” status, too.

We arrived at the base of our chosen route, and, as if on cue, Anne’s theory was driven home.

Two pitches up, a weekend warrior fumbled in a piece of gear below a clean, five-foot roof, the crux of Haystack Crack (5.8). After punching out the moves over the roof, he appeared too pumped to place another piece, and instead worked boldly upward, each move further into ankle-busting territory. As a full-time climbing photographer, I’m privileged to witness, up close and personal, 5.15 redpoints and El Cap free ascents. Watching those climbs occasionally makes my palms sweat a little, but watching the dude fight up Haystack made me dizzy and nauseous. Anne was right: 5.8 is the most extreme grade.

Over the next few weeks I climbed many excellent routes at a dozen different crags in the Tahoe region, each with its own distinct character and style.

At remote Bowman Lake, a great area that has been forgotten and remembered many times over the past 20 years, rock dust still weeps, sifting out, below many of the freshly drilled bolts on a half-dozen newly developed and nicely featured granite walls. The locals Mike Carville and Josh Horniak have spearheaded a revival here, developing obvious crags like Larryland, a bulging belly of rock with crisp, blocky holds that abuts a huge and leaky dam below pristine Bowman Lake.

A half-hour further up I-80, Donner Summit has about a hundred great climbs on some of the hardest granite anywhere. Bolted faces and steep cracks exist in equal measure, as well as some outstanding multi-pitch outings like One Hand Clapping (5.9), three pitches of splitter cracks and overhanging ramps. Nearby, the golden basalt cliffs of Big Chief loom high above the Truckee River Canyon and offer bolted jug-hauls like War Paint (5.9) and The Big Chief Arete (5.11a).

Down by Lake Tahoe and a half-hour’s hike into the vast Tahoe backcountry is the Eagle Lake Cliff, with over a dozen excellent splitter cracks such as Space Truckin’ (5.10a) and Seams to Me (5.10c). Back at the mouth of the canyon, the black-and-white streaked overhangs of Mayhem Cove will intimidate most, but mixed among the 5.13s are a day’s worth of thought-provoking climbs at 5.11a and under. The steep and blocky Car Jacker (5.9) and the techy Cubic Zarconia (5.10a) are both well-bolted and classic.

Wall of the Worlds, a 10-pitch mini big wall on the hulking and remote 1,500-foot Calaveras Dome, is brilliant. A long, windy road and a steep half-hour approach lead to the base of a soaring thin-hands splitter that comprises the route’s first two pitches and is often hailed as one of the best cracks in the Sierra. Calling this route “moderate” seems a stretch: a stiff 5.10+ rating and some PG-ish terrain combine to make this climb a tough day. Thankfully, it is possible to rap the route at any point should you wear out. Down and across the pot-holed Mokelumne River, the lower-angled Hammer Dome has shorter and easier offerings like the giant 5.7 corner Wings and Stings and the fun 5.8 finger crack on the three-pitch Gemini Cracks.

We were also excited to visit Woodford’s Canyon, a crag everybody has heard of, but no one (including me, a semi-local for the past 20 years) seems to have actually been to. As Anne and I trudged up the hot, dusty hillside below the crags, we talked about our chosen route, a laser-cut 5.8 dihedral called The Perfect Lieback. This admittedly short climb still packed plenty of pumpy jams and liebacks into 50 vertical feet, and we marveled at having the entire cliff to ourselves on a sunny Saturday in prime climbing season. Nearby, we stumbled upon a golden, slightly overhanging finger crack we would later learn was the cult-classic Sun Wall Left (5.10c). The miles of cliff line on either side of Woodford’s suggest countless other routes to discover.

So take pride, Mr. Sewing-Machine-Leg 5.8-runout-taker, you are the essence of extreme. Scratch the word “moderate” from your vocabulary—and own your radness!

Guidebooks
A new North Tahoe Climbing Guidebook by John Jackson will be out this spring. Its 476-page length gives you an idea of the wealth of climbing in this vast region, with over 700 hitherto unpublished routes and more than 20 new crags. Many of these “new” routes are previously undocumented classic mid-grade routes from the 1970s and 1980s. Of the 1,240 climbs listed, most of the routes are 5.11 and under.

There is currently no print guide to Woodford’s Canyon. See the Super Guide in Rock and Ice no. 147, Back Issues, www.rockandice.com.

When to go
The Tahoe season generally gets rolling as the snow melts, usually by mid May and lasting until October. The lower-lying Tahoe crags like Sugarloaf and Woodford’s Canyon are sometimes climbable in winter and usually by April.

Lodging
Hotels are abundant in the Tahoe region. At no crag are you ever farther than a 15-minute drive from a selection of lodging options to fit your budget.

Hot Springs
Sierra Hot Springs in Sierraville, half an hour’s drive from Truckee.

Camping
Campgrounds are abundant within the Tahoe basin and you’ll usually find one within a few minutes’ drive of your chosen crag. If free primitive camping is more your style, you’ll find plenty of that, too: http://www.fs.fed.us/r5/eldorado/documents/rogs/rog_pickspot.pdf.

Gear
A standard rack of two sets of cams, a set of nuts, a selection of long slings and a 60-meter rope should suffice for most of the trad climbs, while a dozen draws will get you up most any sport climb in the area.