Beat the heat in northwest Spain between Teverga and Quiros. 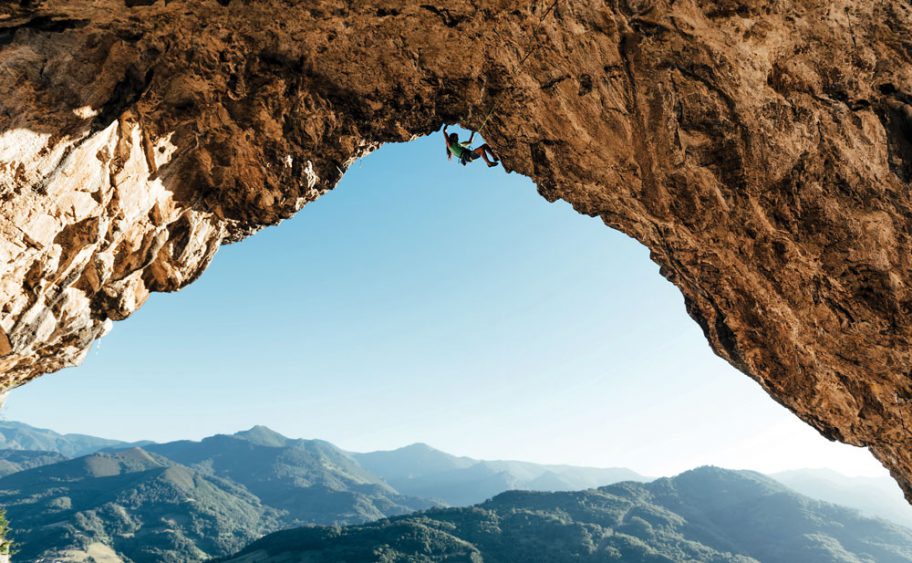 Straining, I popped to the sloper on Sabrina (7c/5.12d). Barely latching it, stoked to have held the crucial boulder-problem move, I reset my feet. ”Venga, venga!” yelled Armando Suarez Diez, my belayer and an area parking-lot lifer as well as the local club’s self-appointed welcoming committee. Then I heard other shouts. Unknowingly, I’d gathered a crowd, and, catching them out of the corner of my eye, I fumbled. The double underclings suddenly felt dire, and the big-ass reach to the good jug—forget it.

Lowering from the route, 25 meters of perfect tufa, I took a hug from Armando, who promptly introduced me to the big and burly Tino Gonzalez, who had bolted this route and over 100 others in the area. Tino’s huge smile said it all. These people were proud to share their cliffs.

Last winter I learned that six months hence I would have two weeks “off” from work and family duties. Hankering for some Euro limestone, I searched the web for a quick-hit destination in July and saw “Roca Verde,” in Asturias, northern Spain, mentioned repeatedly alongside “thumbs-up” icons.

Tucked away on the Atlantic coast, this secluded corner of Europe offers green, mountainous regions that until recently have been known more for the alpine-style climbing typified by Picu Urriellu, the iconic peak in the heart of the Picos de Europa range. Home to rad big walls with routes like the Pou brothers’ Orbayu, a 15-pitch 8c (5.14b), Asturias is a key Spanish climbing destination. However, interest is surging in the area now as much for the stunning sport routes as the high-mountain adventures.

A wealth of information is newly available about the region, one of the few areas of Spain that’s climbable through the summer. Three years ago Richie Patterson, an ex-pat Brit of 11 years and counting, with the help of local climbers, published the first dual-language guide to Roca Verde, containing a vast 3,500 climbs.

I shot him an email and found out it was an ideal destination for me: It had good temps in July and meant a return to my favorite European country, Spain. Richie and I also realized that, since we both had friends in the hard-core Sheffield, England, scene of the 1980s, we’d even met once. With him as a local contact, I booked flights to Madrid and the small airport in Asturias, and started dreaming of my first Spanish limestone in far too long.

I had spent months in Spain in the early 1990s at the classic climbing regions of El Chorro, Montserrat and Siurana, all in areas dominated by English and German tourists and offering cheap hotels, English pubs and a desert climate. In contrast, as I arrived at the tiny Asturias airport perched on the coastal clifftops, I could see that northern Spain was more Old World (even the car-rental agent barely spoke English). I wound down through verdant steep-sided valleys, past tumble-down villages and wooden hórreos (sheds or granaries on stilts), through towns where people were genuinely surprised to hear a foreign voice.

It took an hour or so to drive to the small village of Teverga, where I would be based. I entered the Valles de Trubia, which contains the main areas, marvelling at the tons and tons of rock. Between Teverga and Quiros, the main cliffs, there are over 1,000 routes on more than 50 sectors and in almost every conceivable style, from multi-pitch 4s (5.7) to six-bolt 8c’s (5.14b’s). Yet the wealth of routes only scratches the surface of the area’s potential. Huge walls rear up from the valley floor, and the entrance to Teverga is a neck-straining experience. The majority of the rock is yet untouched.

Arriving in the main parking area, I found a mix of travellers, dirtbags and locals, and a welcoming atmosphere. The local climbing club, Grupo Montaña Escalada Aguja Sobia, is stoked to promote the area and the climbs that members such as Raul Marcos and Manuel Gonzalez are still equipping. In Spain and other areas of Europe, the clubs pay for all of the bolts and anchors. Their initiatives and collaboration with the local council have built a tolerance for climbers that’s often missing in other places, as well as practicalities like bathrooms and hot showers. The chill vibe translates to the crag, where I found it easy to make friends.

The routes were bewitching. With no single, definitive style, they called on my whole quiver of techniques. A single route might contain tufa climbing, a crimpy, slabby crux, and a brutal, burly overhang. They were also long: At the sectors of Pared Negra, Bóvedas and El Covachón, most routes were at least 30 meters, and I got pretty pumped until I got used to spotting the kneebars. (Thank god for all those years knee-barring in Rifle!)

Only 15 minutes away is Quirós, the oldest sport crag in Asturias. Made up of a series of buttresses spread across the side of the 4,000-foot peak of the same name, the cliff has stunning views over the reservoir of Valdemurió to the jagged mountain of Pena Ubiña behind. Though home to the first 8a (5.13b) in the region, it’s mostly the place where local climbers cut their teeth. The crags are open and compact, offering shorter, slabbier routes than other areas, with some sweet multi-pitch thrown in.

A friendly vibe permeates the cliffs, which are neither polished, crowded, nor a hard-core grade or bullshit fest. In less than two weeks here I felt part of the scene, even dining with a bunch of locals, who made me feel welcome.

Before leaving, I wanted to catch a few rays and see the beach. The crags in Asturias are about an hour from the coast, and many climbers fit in a bit of surfing on rest days. We gathered a crew—Manu Prats, Ivan Sempere, Fermìn Camino and Hector Alonso—and some crash pads and headed to a beautiful bouldering area called Cabo Negro, beside a mile-long white sandy beach. Down a steep bank was a sea-washed platform and a cluster of quartzite boulders, where we climbed on the rough black stone until sunset. Tranquilo.

In July I had: cloudy, sunny, cold, hot and some fog! Bring a down jacket and pants for the shade. The maritime climate means that spring is the least stable time. The best times are mid-May to December, with optimum climbing temps September through November.

The area is great for mixed-ability groups. The biggest crags, Teverga and Quiros, represent a perfect overlap of grades. Quiros is a brilliant moderate crag with 300 routes, mostly between 5+ (5.8) to 6c (5.11b), while Teverga’s got nearly everything a more seasoned road warrior will be looking for, around 800 routes and a ton between 7a (5.11d) and 7c (5.12d) and beyond.

Valles de Trubia: There is no camping area, but a popular option is to stay at the large parking lot at Entrago, which the local club manages. There are toilets and showers, and some tents are allowed, as are vans. It’s a great scene, and picking up partners here in summer is a breeze if you’re traveling solo.

Other options include: Bar Pena Sobia, at Teverga, is the climbers’ bar. I had a sweet apartment upstairs with perfect wifi: apartamentoruralteverga.com.

Hiking, road biking, mountain biking, prehistoric cave paintings, huge caves, the Romanesque churches and cathedrals of the capital Oviedo, swimming pools and a lake: The Valles de Trubia is one of the tourist hearts of Asturias, and there is plenty to see and do. It’s about an hour to a variety of beaches.

Brush up on your Spanish—the locals don’t speak English. The food is tricky for vegans, gluten-free and vegetarians, but otherwise these regions have fantastic food: strong cheeses (still matured in caves), dried meats, the famous bean stew fabada, and, of course, the legendary cider, poured from several feet in the air.

Roca Verde, by Richie Patterson. In English and Spanish, with over 50 crags, 239 sectors and nearly 3,500 routes. Available at rocaverdeclimbing.com for $37.

BOBBI GALE BENSMAN has been rock climbing since 1980 and is the co-owner of Rincon Group Sales in the Rockies.